Choose the Best Knife for the Job 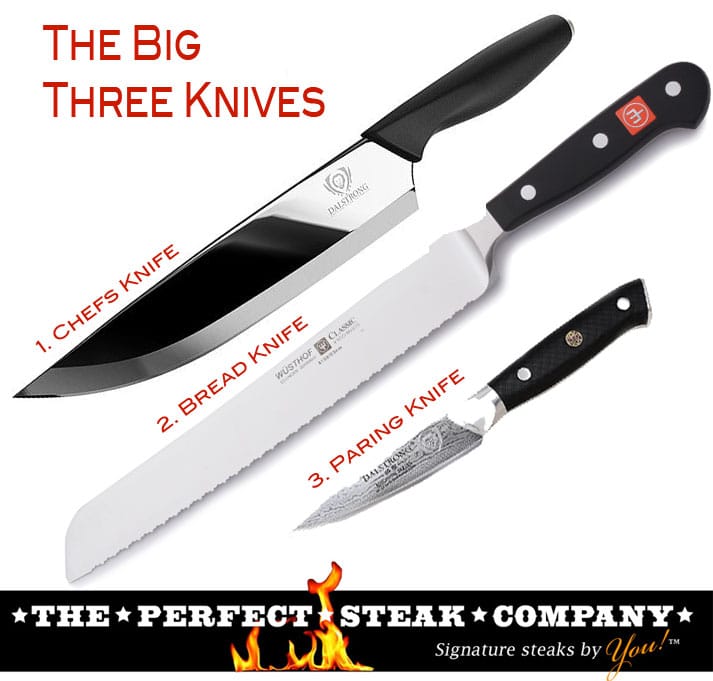 The 3 Most Important Knives to Have in Every Kitchen 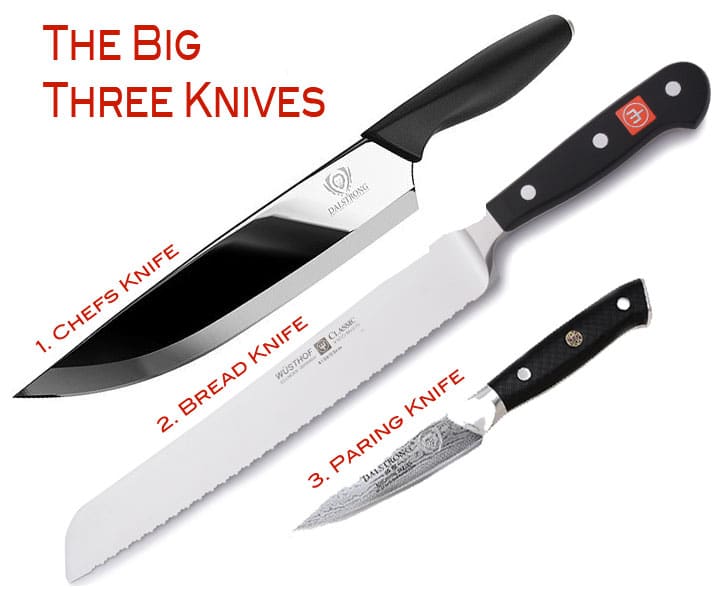 If you could only have three knives then most chef would agree that they would be a Chefs Knife, a Paring Knife and a Break Knife. With these three you can pretty much tackle any cutting job in the kitchen. These would the knives that you would spend that bit extra on to ensure they are really top quality. That means they hold a sharp edge really well, are well balanced with a handle that feels comfortable to hold and,

The Chefs knife a versatile cutting knife designed for a wide range of general purpose jobs in the kitchen. A Chefs knife is usually quite big, around 8” or 20cm and professional chefs take great care and pride in keeping its honed to a very sharp edge.

Different countries have different variations of shape to what they consider the ideal chefs knife. The Japanese version is known as the “Gyuto” which literally means “beef knife”.

Typically a Chefs Knife will have an edge of 22.5° (that is half of 45°) on either face. Knives with harder steel can sustain a sharper edge of down to 15°. Ceramic knives which are even harder again can hold an edge right down to 12°. The downside of this sharper edge is that the material is more brittle.

A good chefs knife needs to be well balanced and feel comfortable in your hand. A vitally important part of a good Chefs knife is the Finger Guard. This is what prevents your hand from slipping forward when the handle gets slippery.

Owning a good quality Paring Knife (often called a Utility knife or a Coring Knife) is a must for anyone who spends time in the kitchen. Small and sharp, Paring Knives are designed for paring, that is, cutting away the outer edges, and thus they need to be sharp and versatile.

Paring knifes should have a comfortable handle which is slip resistant. They are typically less than 9cm or 3.5 inches in length from the point to the butt.   Considered by experts to be one of the 3 necessary knives, the other two being Bread Knife and Chefs Knife.

A Bread Knife is a long knife with a serrated edge. Serrations were a significant invention to knife technology and were first exhibited at a World Exposition in Chicago 1893. The idea was to let the grooves or serrations do the work as the knife was drawn thus cutting without crushing. Serrations also go both ways allowing this same delicate slicing action by both a pushing or pulling motion. 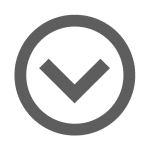 The knife can be identified by it’s sheeps-foot shape (if you look at it from the side it kind of looks like a sheep’s foot). It’s not an overly large knife, typically being from 13cm to a maximum of 20cm long. Many modern Santoku knives feature the popular Scalloped sides which are said to ease resistance during cutting. This is strongly built knife and will serve well for heavier-duty cutting jobs.

A meat cleaver is used more to chop than to actually cut or slice. It has a sizable rectangular blade which is relatively thick. The blade is usually sharp but not razor sharp. This is because it needs to have a thickness to it to withstand the repeated chops and blow of cutting through cartilage and bone.

Smaller sized meat cleavers are a popular kitchen accessory in modern kitchens for doing the heavy work that a chefs knife just isn’t cut-out to do. The actual edge is more like 25° which makes it less sharp but better able to maintain its dullish edge. Used in a chopping action it takes some skill and practice to actually bring the blade exactly to the point of aim. Fingers and hands should stand well back.

Unlike kitchen knives, a Steak knife is used at the table, typically for cutting steak. Most steak knives, although not all, have a serrated blade which allows for cutting of the meat in a sawing action. The serrations need to be within an exact size range, to large and they catch and hack, to small and they are ineffective. A top quality steak knife is an essential element when serving a perfect steak.

Carving Knives are often referred to as Slicing Knives. What we’re talking about here is a long narrow blade that is used to slice meat into thin strips. Typically, when used for carving meat it is used in conjunction with a Carving Fork which holds the meat, be it a roast, ham or other large portion of cooked meat in place while the carving knife does its work. Typically carving knives have sharp smooth edges however serrated carving knives are also common. In fact, bread knives are often used as carving knives.

Carving knives should be occasionally sharpened with a stone or knife sharpener and regularly touched up on a steel. Because they are designed to have a very sharp edge they should not be stored in draws with other implements because the edge qill quickly become dull.

A good Carving knife should feel almost like an extension of your arm. The shape and weight of the handle, the blade material and edge all play a part in a quality carving knife. Carving Knives are long, typically 20cm or 8 inches long however its not uncommon for them to be as long as 30cm or 12 inches.

A butcher’s knife is designed to slice, cut and separate large pieces of meat such as a sirloin or rump. It’s usually around 25-30cm in length with the blade curving upwards toward the tip.   Butchers keep their primary tool of trade very sharp and are constantly steeling it keep the edge perfectly honed.

This is a blade made to cut hunks and chunks of meat. Modern butcher’s knives are made with plastic handles instead of the traditional wooden handles and many are shaped so as to ensure the best possible grip. Modern plastic handles also bond to the Tang of the blade better ensuring a high degree of sanitary when the blade is pulled out.

Also called a Knife Steel or Honing Steel it is a hard smooth metal rod made to draw along the edge of a knife to literally straighten the edge. As a knife is used to cut, the edge tends to curl to one side or the other and by gently rubbing the edge of the knife along the steel, the edge is restored.

Steels don’t actually sharpen. Their function is more maintenance performed on the blade to keep the edge aligned. Sharpening is done by a different tool such as an oilstone or whetstone.

Steels are usually 30cm or more long and are made with longitudinal ridges. Diamond steels are slightly different and instead of ridges they are embedded with abrasive diamond particles.

Also called a boning knife, this is a specialised blade with a sharp narrow point and curved narrow blade. Naturally enough it used to remove bones from beef, lamb, poultry and fish. It’s narrow blade and sharp tip make it a precision instrument, particularly in the hands of a skilled butcher.