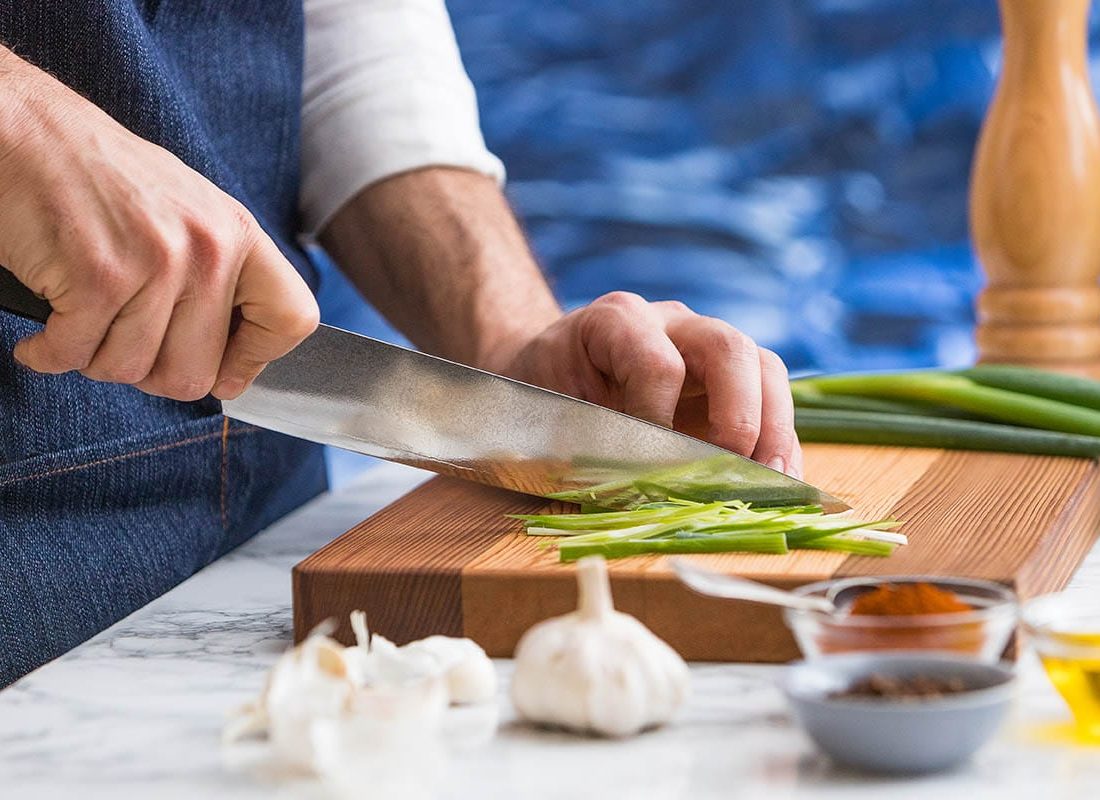 When it comes to choosing a chef knife in Australia, there are a huge number of options to compare against each other. There are so many knives with different designs, materials, and lengths that picking the best knife might seem like an overwhelming task, which is where some helpful advice can come in handy. Firstly, what is a chef knife? The ‘chef knife’ was originally used to cut up large joints of beef, but now in modern times the name is placed on any knife that is suitable to be used in a professional kitchen and is well-known as a capable all-rounder and a faithful tool. This doesn’t mean that it should only be used by professional chefs, however, anybody can enjoy the high-quality workmanship that has been put into manufacturing the following great knives.

The knives in the following list all sit at a recommended length of eight inches which is the perfect size for most benchtops and cutting boards and excels at being able to finely slice smaller items while also being able to handle larger cuts of meat or vegetables. Their stainless-steel blades are also the best for keeping clean and have an unparalleled strength against other materials such as ceramic or high-carbon steel.

Number one goes to the Mac MTH-80 for its comfortable grip, dimpled design, and easy handling. This is one of the most popular knives that MAC sell for good reason- the main difference between this knife and the others on this list is that it has a dimple design that lets it cut through food like potatoes or apples easily, without getting in the way of its aesthetic or manoeuvrability. The lightweight Pakka wood handle contributes to its comfort which is so important for everyday use. The MAC MTH-80 allows for excellent control- from chopping the thinnest of garnishes, to peeling, and to neat cuts- regardless of the level of skill of the user and it feels well-balanced. This is partly because the knife is a Japanese make which means its design is slightly smaller and thinner than some of the other knives on this list. Another reason is the half-bolster (the part where the knife blade merges into the handle) which acts as a counterweight for the blade and keeps it from feeling too light. This knife is also sure to have an almost-impossibly sharp edge right out of the box thanks to MAC’s tireless quality testing. There are few downsides to this knife but one of them would be the price – while the MAC is perfect for beginners, it’s also quite expensive. Due to its make, the handle may be too small for people with larger hands so make sure to take that into consideration.

The Shun Classic 8” Chef Knife is a really great knife. On top of being aesthetically impressive with its neat D-shaped handle, clean lines, and stunning Damascus patterning on the blade, this knife is highly manoeuvrable and has no problem with most foods. Similar to the MAC, the shun is a Japanese style knife with a half bolster for a sleeker way of balancing the knife, but the main difference is that it is much larger. This does not mean that it is much heavier – the weight is beautifully distributed through the light pakkawood handle, the half bolster, and its thin blade which makes it lighter than Western knives of the same size. It also has a rounder handle than the MAC which is beautifully contemporary and its longer length makes it a great choice for larger hands. The D-shape design of the handle however, was designed with professional chefs in mind and newer cooks may have a hard time keeping a comfortable grip on the knife if they have not been taught the professional pinch grip. This can also affect how long the blade will stay sharp. Another reason this knife is great is that the eye-catching pattern on the blade is not just aesthetic. The steel core that makes up the edge is pressed between the layers of the Damascus steel which ingeniously shields the core, as it is more prone to cracking due to how hard the steel is. The Shun Classic is probably the second hardest knife on this list which means that it will hold its edge for a long time. This comes with a drawback – the higher edge retention a knife has, the harder it will be to sharpen when the time comes, but this is not a huge hassle. Its intense hardness does need to be taken into consideration when in use; like the MAC, it should not be used to cut bones, blocks of chocolate, or frozen foods and should never be dropped or thrown onto counters or into sinks. 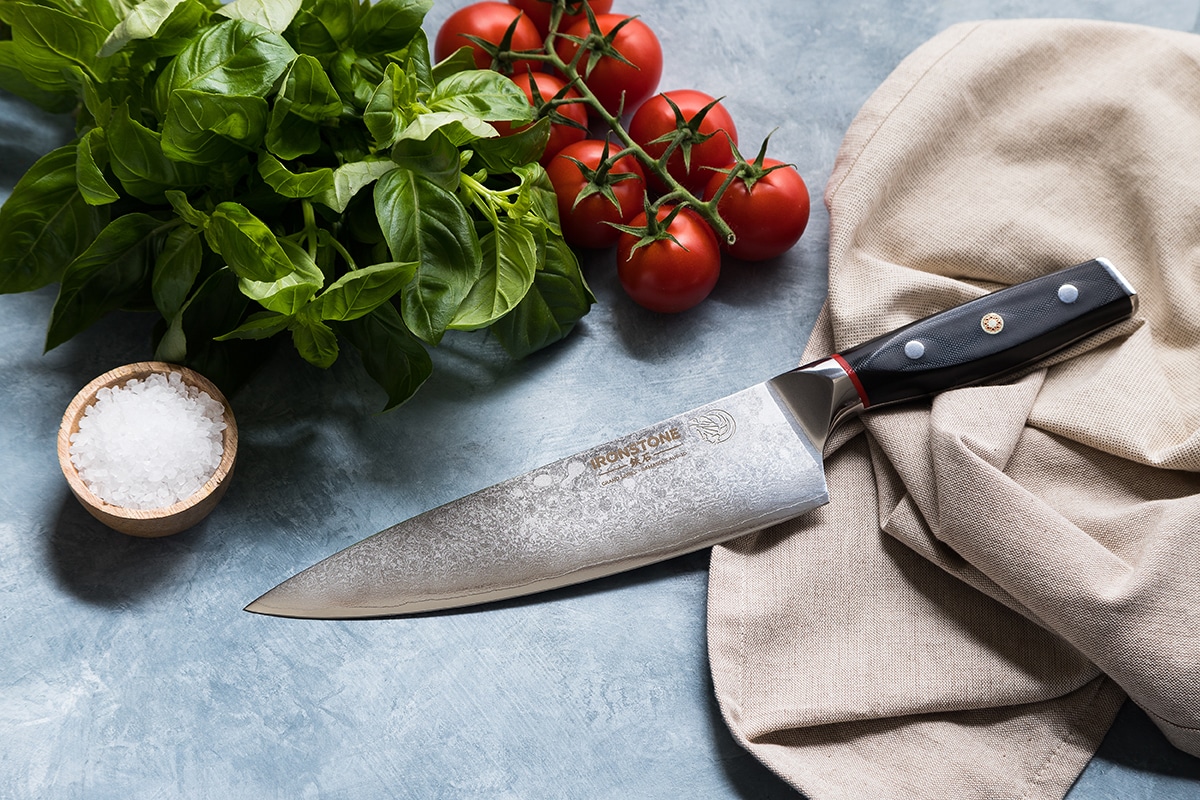 The Ironstone Grand Series is probably the least known knife on this list, even more-so than the MAC, but this doesn’t mean it doesn’t deserve to be acknowledged. This knife is a real contender for Best Chef Knife due to its outstanding aesthetic, its premium quality materials and the incredible sharpness. The blade itself is imbued with a feather Damascus pattern and engraved with the mascot of the frilled-neck lizard. This emblem harks back to its Australian origins in that the iron-ore that this knife was originally made from comes from the Ironstone Ranges in Kimberly region of Western Australia. That iron-ore is then smelted in Japan into Aus-10-Vadium high-carbon steel, often referred to as “Wonder Steel” for its optional balance of hardness and corrosion resistance. This knife has it’s centre of gravity set slightly forward of the bolster line which is an elegant design feature allowing the blade to naturally rock forward when cutting, a technique preferred by many professional chefs. Combine this with the high heel, 52mm, and an acute edge of just 8-12° you get a knife which is incredibly efficient, not to mention fun to use. Something which really impressed us when making our evaluation is the sinuate line. This is the edge between the Damascus pattern and the knife edge. Each sinuate line on the Ironstone knives is slightly different. This is because each knife is hand sharpened using the Honbazuke Method making each knife a one-off original, not a mass-produced factory knife.

Another stand-out feature is that the Ironstone Grand series has a handle that is 35% larger than others in similar knives which, according to the feedback of professional chefs, allows it to feel more balanced in the hand like the Shun. This knife is a Japanese-German fusion which takes the best aspects of both knife styles and creates a tool for optimal performance, with a much fuller blade-belly than the Japanese MAC and Shun which allows the knife to be used in a natural, ergonomic rocking fashion while still having the intense sharpness that Japanese knives are known for. The reason this knife was not number one was because it is a relatively new contender on the market, having just been released this year. The knife has a garolite handle – which is not a bad thing. In fact, garolite will not stain or absorb moisture like wooden or hybrid handles, but many chefs prefer the latter due to aesthetics. A nice addition that wasn’t accounted for in grading this knife is that it comes with a leather sheath to protect its edge.

The fourth addition to this list is a great knife for a beginner or budgeted chef as the cheapest option in cost, but still a very quality chef’s knife. This knife varies greatly to the Mac and Shun as it has a European-styled design – this means that the blade is thicker and wider than Japanese-styled knives. One drawback of testing these features against Japanese-styled knives is that it will feel less manageable for smaller foods or herbs but will do well for cutting larger vegetables like squash or sweet potato. The size of the blade does not weigh it down, however – this knife is relatively light compared to others in this list, perhaps due to the Fibrox handle material which is a lightweight plastic, and the fact that is does not feature a bolster. The plastic handle of this knife has a textured slip resistant grip which will even work with wet hands – but the positive aspects of this handle are outweighed by its ‘cheap’ and ‘bulky’ feel. This knife is also not as sharp as some of the others – but this was expected due to its European design. The Victorinox Fibrox Pro Chef knife is easy to sharpen and upkeep, which it requires much more often than the others on this list. Like the Ironstone, this knife makes chopping an almost-effortless task and works especially well with a full-blade rocking technique. This knife is more likely to survive a fall than the other knives mentioned in this list and rates really well when compared against other European-style knives at the same price, especially for a Swiss-made blade.

Last but not least on this list is the Global G-2 Classic which is a figurehead of innovation that this brand is so well-known for. This knife is lightweight and exquisitely modern as the whole of the knife is aesthetically one piece of high-quality stainless steel. This sleek design easily allows the G-2 to be kept clean and hygienic and does not include a bolster which accounts for its weight, or lack of. While the handle of this knife is contemporary, the blade is a stamped-steel hybrid of Japanese and Western design with an incredibly sharp edge. It excels at slicing tasks and will retain an edge for a long time but cannot compare to the edge retention of the MAC, Shun, or Ironstone knives as it has a softer steel, but this will make the sharpening upkeep easier. The handle of the Global is dimpled for grip which works impeccably well alongside its traditional Japanese shape with dry hands, but unlike the Victorinox it does not feel secure when used with wet hands. This knife is a great choice for people with smaller hands or people who appreciate an agile and lightweight knife, especially if muscle fatigue is a concern while working in the kitchen.

Each of these knives have a stand-out reason that they were chosen to be a part of this list, and even after careful deliberation, they could all be number one to different people.  The fact is that the way a chef’s knife feels in the hand and while in use will be entirely personal to the cook who is using it. The best way to enjoy a chef’s knife is to make sure it feels not only comfortable, but satisfying when in operation, and to make sure that it is kept sharp – which won’t be a problem with any of these knives.