Marbling in meat, and why it’s good?

Streaks of fat in the lean parts of meat are referred to as marbling. This orientation draws its roots from resemblance with the patterns of marble.

It is widely believed that thoroughly distributed marbling adds flavor to meat. In fact, it is counted as one of the most important decisive factor for judging the superiority of meat. The standard belief about it is that the more marbling meat has the better would its cuts be considered.

There are a few factors that can influence marbling in meat, of which selective breeding is the most important one. Other than this, time of feed and type of feed to the animals also have a crucial role to play in marbling.

Marbled meat generally comes from the loin (back) of animals. The back area of animal body is not exercised as much as other areas are. This is the reason why maximum calories are stored in this region, giving fine fat streaks (marbles) to it.

Let us now understand how that adds to the flavour.

When meat is cooked, the fat (marbled streaks) melt which makes it tender. That melted fat uplifts the flavor substantially. Moreover, it may surprise you that most of the quality in terms of texture and flavor comes from the marbling and not the meat itself. Furthermore, it is these melted fat streaks that add to the aromatic flavour that enhances the overall taste of meat.

However, in case of meat without marbling, you will find it considerably less smooth in terms of texture, and the overall flavor will also lag behind, when cooked.

Here, one thing that must be kept in mind is that even if your overcook finely marbled meat, all its fats will disappear, leaving completely tasteless and dry meat.

So, the next time you buy meat, you might want to check if it is marbled or not, and yes when you cook marbled meat, make sure you cook it moderately; otherwise, you will not find it any better than dry and comparatively less flavorsome meat, which might not what you want.

May 17, 2018
One of the most important checks to be done while cooking food would be the “Temperature”! Good food would be cooked to the right temperature. Conversely, the need for kitchen cooking thermometers has increased.
Read More
May 31, 2017
The best knives you can purchase in Australia There is no question that cooking is one of the finest arts in the world and being able to have the right kind of knife in the.
Read More

May 31, 2017
Shun knives are the best Choice There are many important activities in the kitchen that require the use of sharp kitchen knife. This is the reason why so many world-renowned chefs consider that there is.
Read More
December 7, 2016
Over time and as a result of drops and other kitchen mishaps, some thermometers (particularly dial thermometers) can become less accurate and require recalibration. Although digital thermometers like the ThermoPop and especially the Thermapen.
Read More
November 28, 2016
Just use the Coupon code below in the checkout and enjoy this great tool. SteakChamp2016 Valid till 30th November 2016. Product Link: https://www.theperfectsteak.com.au/product/steakchamp-thermometer-medium-rare/ 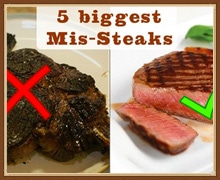 September 16, 2016
The 5 biggest Mis-Steaks people make when cooking Steak Cooking The Perfect Steak isn’t rocket science, it’s much harder than that. Even Leonardo Di Vinci chose the easy option of designing a helicopter rather than.
Read More

May 18, 2015
A precise, instant read thermometer will help you make amazing dishes in the kitchen! It is an essential tool that would help you accurate measurements and flawless decisions. If you are hunting for meat.
Read More

February 25, 2015
It’s excellent to involve some idea of the sort of steaks you’re thinking about buying before going to market. At least you have to know, how much steak you need, how you might prepare.
Read More

November 3, 2014
Good news for all the steak lovers now you can buy Thermapen with Aussie Flag on it. You wouldn't believe how many Thermapen's we sell in Australia! So, after U.S. Flag and.
Read More

October 21, 2014
Take the guesswork out of grilling perfect steaks with these innovative thermometers. To use, simply activate the thermometer by placing it in the cradle, insert sideways into the steak, and flip and rotate as.
Read More